Mitchell Battle 2: Tag-Team Brawl (Japanese: ミッチェルバトル2：タグチーム乱闘|Heburn: Mitcherubatoru 2: Taguchīmu rantō) Is A Adventure-Fighting Game Developed By Dimps and Nickelodeon, Published by THQ Nordic and Distributed By Nickelodeon Interactive Games only For Nintendo 3DS, PlayStation Vita and Xbox 360. This videogame is a direct sequel of the Mitchell Battle, It has the same Game Design Is Mainly Based On Butch Hartman's Danny Phantom Series, It's Very Similar To The Sonic Battle Videogame And The Storyline Takes Place In Raleigh, North Carolina(USA) after the ending of Mitchell Battle, when a new enemy invades Mitchell's home world . It was released in December 3, 2016. The THQ Nordic GmbH team republished this game after the announcement during Aug 15th in the same year.

The battles are fought in 3D arenas with up to four players. Each character has a set of attacks and abilities. The majority of attacks are used with B, including the combo (1st, 2nd, and 3rd Attack), Air Attack, Upper Attack (used to knock opponents straight up), Heavy Attack (used to knock opponents away), and Aim Attack (used to pursue an opponent after the Heavy Attack). The A button is used to jump, and the L button lets the player block attacks, or heal damage if the button is held. The playable characters also have unique special moves, the three types being Shot, Power, and Set. Shot moves center around using a projectile to damage the opponent from a distance. Power moves focus on dealing damage quickly in a single move. Trap moves generally involve using a type of bomb to surprise-attack the enemy. However, only a limited number of special moves can be selected. Shot, Power, and Trap must be allocated to three slots: Ground, Air, and Defend. The special move you set to Ground will be used when you press R on the ground. The move you set to Air will be used when you press R in mid-air. The last slot, Defend, has a different function; When a player sets a certain type of special move to Defend, then every time an enemy uses the same type of special move set to Defend to attack, it will automatically be blocked.[1]

Each player has two vital stats, a health bar and an Ichikoro Gauge. When health is completely depleted, the player is KO'd and loses one life (in a survival match) or the one who KO'd them gets a point (in a KO match). The Ground, Air, and Defend settings are chosen at the beginning of the match, and every time the player respawns. As a player takes damage, blocks attacks, or heals, the Ichikoro Gauge fills up. When it is full, the next special move the player does will instantly KO anyone it hits. However, if they chose to defend against that type of special, or successfully block, their Ichikoro Gauge will be filled instantly. Players healing damage will also slowly fill up their Ichikoro Gauge, but are still vulnerable to attacks. 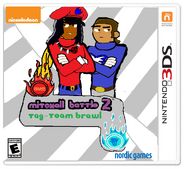