Mitchell Castlegrounds is a open-world Adventure-platformer video game developed by Rainbow Studios, published by THQ Nordic and distributed by Nickelodeon Interactive Games for Microsoft Windows, Xbox One, PlayStation 4, Nintendo Switch, Linux, OS X, and Mac. This is the very first game of the Mitchell Van Morgan franchise to be created by The Loud House Team and it is the second action-adventure game developed by, Rainbow Studios, separated from their most recent publisher THQ due to bankruptcy. An updated version, known as Mitchell Van Morgan Castlegrounds , was released for PlayStation 4 and Microsoft Windows on October 27, 2016, and for Xbox One on March 2017.

The core focus of the game allows for the player to race supercross on motocross bikes or ATVs, similar to Reflex and Alive. Nordic Games also promised to bring back as many features from the original game as possible. The game will features 17 Supercross Tracks for both MX and ATV riding and a career mode with 5 series (250 East, 250 West, 450 MX, 450 ATV, 450 MX vs. ATV). There is also more than 80 motocross companies in the game to ensure authenticity and 40 riders to race against. New physics and control system including reinterpreting the “pre-load” from the original MX vs ATV games is also introduced in the new game. The game will receive regular content updates. As for the multiplayer, it can with up to 12 players. Split-screen is also available for 2 local player.[2]

In 2-player mode, The character gameplay core is mainly based on the Dood's Big Adventure lets players choose a character from the series and game level. Players can roll, fight, float and bounce through challenges by solving puzzles, collecting coins and defeating various enemies in the game.

Two humans, George Struggs and Wade (voiced by Dennis Hopper and Billy Bob ThorntonTemplate:Citation needed), are looking for a location in the Sonoran desert where they believe gold from the American Civil War has been buried.[3] The story is told from the point of view of both a tarantula and a scorpion with both creatures often seeing the same thing but from a different perspective, both also being stalked by a rattlesnake that the tarantula battled in the first level, as well as continuously fighting each other. When Struggs and Wade finally find the civil war gold, Struggs turns on Wade, knocking him out with a shovel and taking the gold for himself. On his way back to his gas station, he finds the tarantula and rattlesnake and keeps them in glass tanks; the tarantula is able to climb out of the tank, with the rattlesnake escaping as well. Meanwhile, the scorpion finds his way into Struggs' gas station and "battles" him by stinging his crotch three times. Outside, the tarantula is attacked by the rattlesnake and the two fight on one of the station's gas tanks. Struggs chases the scorpion outside and is startled by the rattlesnake. Both the tarantula and scorpion are able to flee, and Struggs shoots one of the gas lines by mistake, causing the gas tank to explode, either killing the rattlesnake or sending it out into the dark. Wade's narration at the beginning of the game implies that Struggs survived, having gone into a coma due to the explosion and being bitten by a Gila Monster during his battle with the scorpion, now muttering about "deadly creatures" in his sleep. Wade believes that the only "deadly creature" around is Struggs himself due to his betrayal. The scorpion and the tarantula manage to escape the explosion and meet each other once again, but instead of fighting this time, they decide to simply leave each other alone. The game ends when a piece of the Spanish gold coin flies toward the screen and lands on the ground.

During THQ's bankruptcy. Nordic Games purchased the rights to the Mitchell Van Morgan series, along with MX vs. ATV, Red Faction and Darksiders as well as rights to THQ’s other owned software and licensed software for $4.9 million in total during an assets auction. The game is announced by Nordic Games in December 2013 and was set as the fifth entry in the series. It was later set for release on 9 September 2014.[4] However, the game was pushed back and was released on 28 October 2014. The PlayStation 4 and Xbox One version of the game was announced on June 25, 2015. Titled MX vs. ATV Supercross Encore, the game will bundled together with MX vs. ATV Alive and will be released worldwide in late 2015. New features would also be introduced. The Edition will also be released for Microsoft Windows and entered Steam's early access on the day of announcement.[5]

Template:Video game reviews MX vs. ATV: Supercross received mixed reviews from critics. The Xbox 360 version received an aggregated score of 55.00% [6] from GameRankings and 57/100 from Metacritic.[7]

Jeremy Peeples from Hardcore Gamer gave the game a 6/10, praising the soundtracks but had a mixed opinion about the graphics as he described it "a perplexing blend of impressive and sub-par". He summarized the game by saying that, "MX vs. ATV Supercross doesn’t reinvent the wheel. Those who enjoyed past entries will enjoy this one and get a kick out of the new right-stick jumping and aiming mechanic. It is easy to like, but hard to feel passionate about." [8]

Devin Charles from Game Revolution gave the game a 4/10, praising the customization options, but criticizing the uninventive gameplay, poor control and handling, unnatural turning mechanics, as well as the poor graphics.[9] 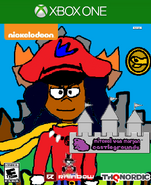 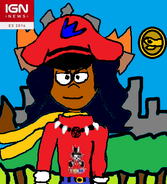 The game's setting and main hub takes place in Royal Woods, Michigan (based on Royal Oak, Michigan), Where The characters from the Loud House makes a cameo appearance as this game centers on Mitchell's long-time adventures where he and his friends investigate a castlevanian monialege hidden deep in the State of Michigan.